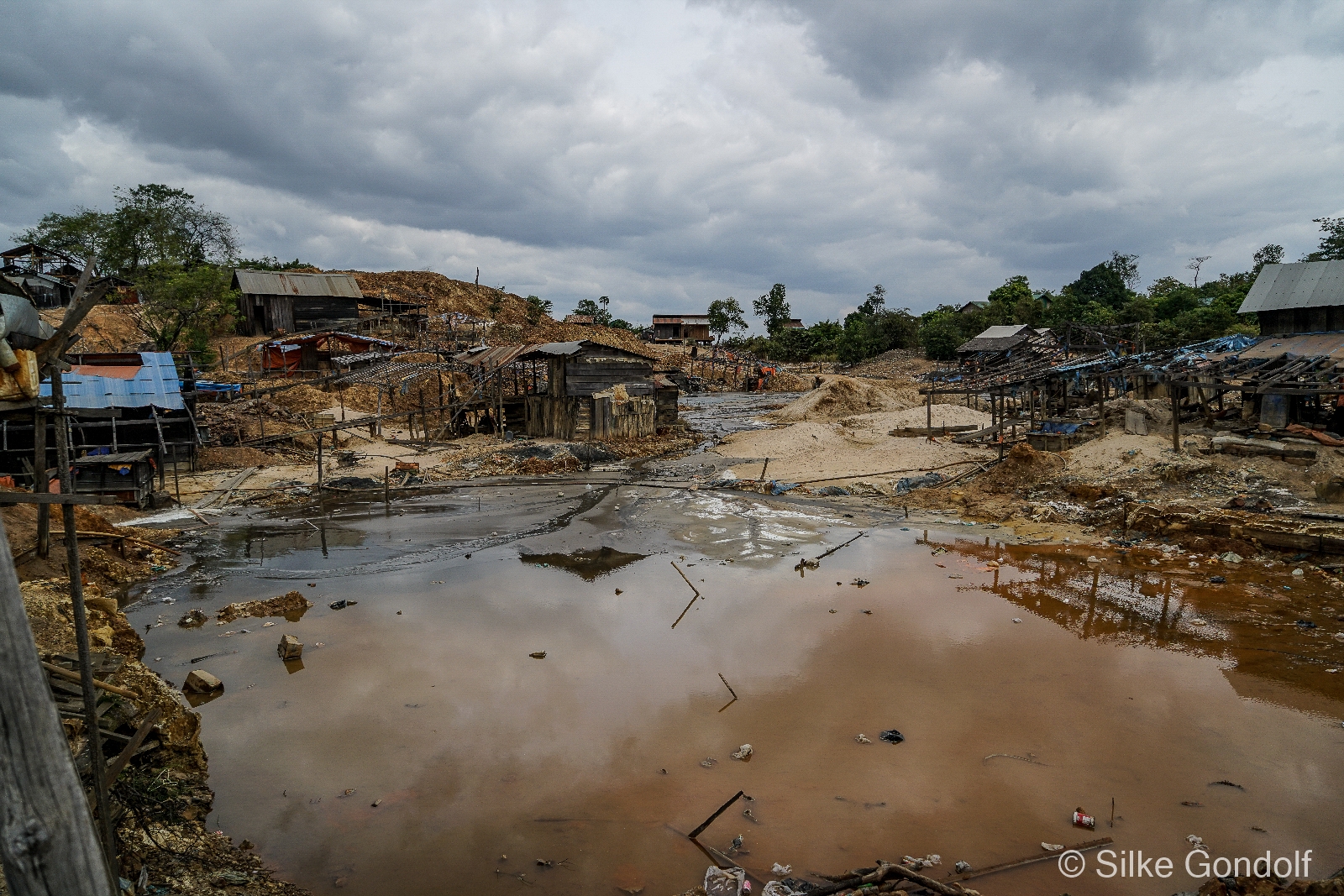 The Gold Forest is an area off limits to everyone not into the gold business. It is a remote stretch of land with its own rules of law.

Preah Mear is one of Cambodia’s biggest illegal gold mining areas. The small, illegal gold digger ventures are cradled into the concessioned land, held by a Chinese company running three mines here, with a depth of up to 500 meters. The Chinese investors aim to harvest 100,000 ounces’ gold per year – 2835 kilogram – every year, for an 8-year minimum.

To do that, they have to process 1.5 million tons of ore per year – and this is done with dynamite blasting and conventional drilling by many cheap local laborers who risk their lives every day and year round. The gold rush orchestra is playing 24/7: while generators and stone grinders give the baseline and the loud ringing bells interrupt the groove.

The ringing bells tell the miners above the shaft to pull up their bucket, filled with ore from the underground. In-between the sound arrangement, antique looking constructions of gold sifting/extracting slides, sediment and metal loaded water dripping out everywhere, and 4-wheel drive SUVs make their way to deliver diesel by the canister for the generators – or to feed the beast. Illegal miners descend into their hand digged pits in plastic barrels, hoisted up and down on pieces of wire or rope.

They have swapped the standard safety helmets in favor of baseball caps. They are driven like gamblers to succeed: one day, maybe tomorrow, they will strike a rich vein. The cohabitation with the big mining operators leads frequently to considerable tension, especially about the remuneration. People disappear not just by collapsing mine shafts.

Only if people have no money to start their own gold mining operation in Preah Mear will they work for the Chinese, says a local miner, who doesn’t want to give his name. He owns a small shelter, a tarpaulin-covered open hut with a stone-crushing machine on one side, next to a small stove that separates his mining equipment from a simple bamboo berth – his bed.

The mining settlement is surrounded by thick forest and steep hills, it is only possible to get there and away with special trucks – or with the help of a local driver. The more fortunate local workers live along the dirt road leading dead end into the mining area. The small villages are a much better choice than living in the mining town. Young miners are tuning their motorbikes, they rebuild the frame into something like a mars vehicle to battle the harsh environment – and to keep their dignity.

One tribal worker I met sleeps next to the shaft of his mine. He doesn’t want to say his name or hometown – but proudly reports that he is producing about 0.2 grams of gold per day. He can only sell to one of three Chinese gold dealers in Preah Mear market, for a price that is dependent on the international markets – and on the mood of the Chinese buyer.

The Chinese run this place, things are happening the way they want it, they have the monopoly in Preah Mear and the power to trade gold. The Khmer police are guarding the Chinese operations, far away from any jurisdiction – and give them the official protection on behalf of the Cambodian government. Technically, all Cambodians could apply for an artisanal mining license from the Ministry of Mines and Energy, but in reality, very few take up this option. They would be registered, required to file quarterly production plans and pay royalties and taxes. Nothing they like.

This area has been unofficially mined for more than 25 years. Every couple of months you read in the papers that the government will stop this gold rush endeavor – but nothing happens. When I was walking around with my camera, miners started to throw stones, because they suspected I would report to the government or environmental NGOs.

Police and government know what is happening here and it is also their business; they generate an extra income with gold – without paying taxes or royalties either. The dense rainforest around the gold mining area was once the hideout and stronghold of the Khmer Rouge. The Khmer Rouge were regularly robbing the gold transporters leaving the mines. The Khmer Rouge kept themselves and their gruesome ruling going with funding from gold and gems – until the early years of the 21st century.

The small shrines along the dirt road pay respect to the lives lost during that long period of Khmer Rouge activities – almost 10 years after the official end of the KR power. Everyday relatives leave fresh water, candies and money in front of the spirit houses along the way. The Chinese investment company Zhong Xin now owns the concession that covers the whole mining area in Mondulkiri. The size of the total concession area of Preah Mear is unknown as the agreement has never been made public, but locals say it is about 45 square kilometers – a place that looks like the aftermath of a nuclear holocaust – in the middle of the rainforest.

Gigantic pools, so called tailings, of toxic water reflect the sunlight with an apocalyptic twist. The mercury, used to separate the gold from the ore, is dumped into the ground after usage. There is no sensitivity for the environment. The mercury levels measured in people, ground water, rivers, fish and earth are extremely high. Cyanide, sodium cyanide, zinc, sulfuric acid – the miners expose themselves constantly to the risks of dust and chemicals used to purify gold. During the rainy season malaria becomes another huge threat. Chinese migrant workers earn $ 2000 a month and local, often tribal or indigenous people earn $ 70 a month – working every day in the Chinese mine. There is tension between the people, intercultural communication poisoned by racist behavior on both sides.

Many miners in the town admit that they hate the place, but none wants to leave. The fatal accident rate among the illegal miners is the highest. After accidents, the Chinese Investment group has difficulty recruiting workers, people are scared to go back into the shafts.

Illegal mining is done secretly miners do not share information. They dig sometimes up to 50 meters deep and then start fanning out with horizontal shafts. When accidents happen, the person stays buried in their shafts and the mining equipment is the gravestone left behind for corrosion.