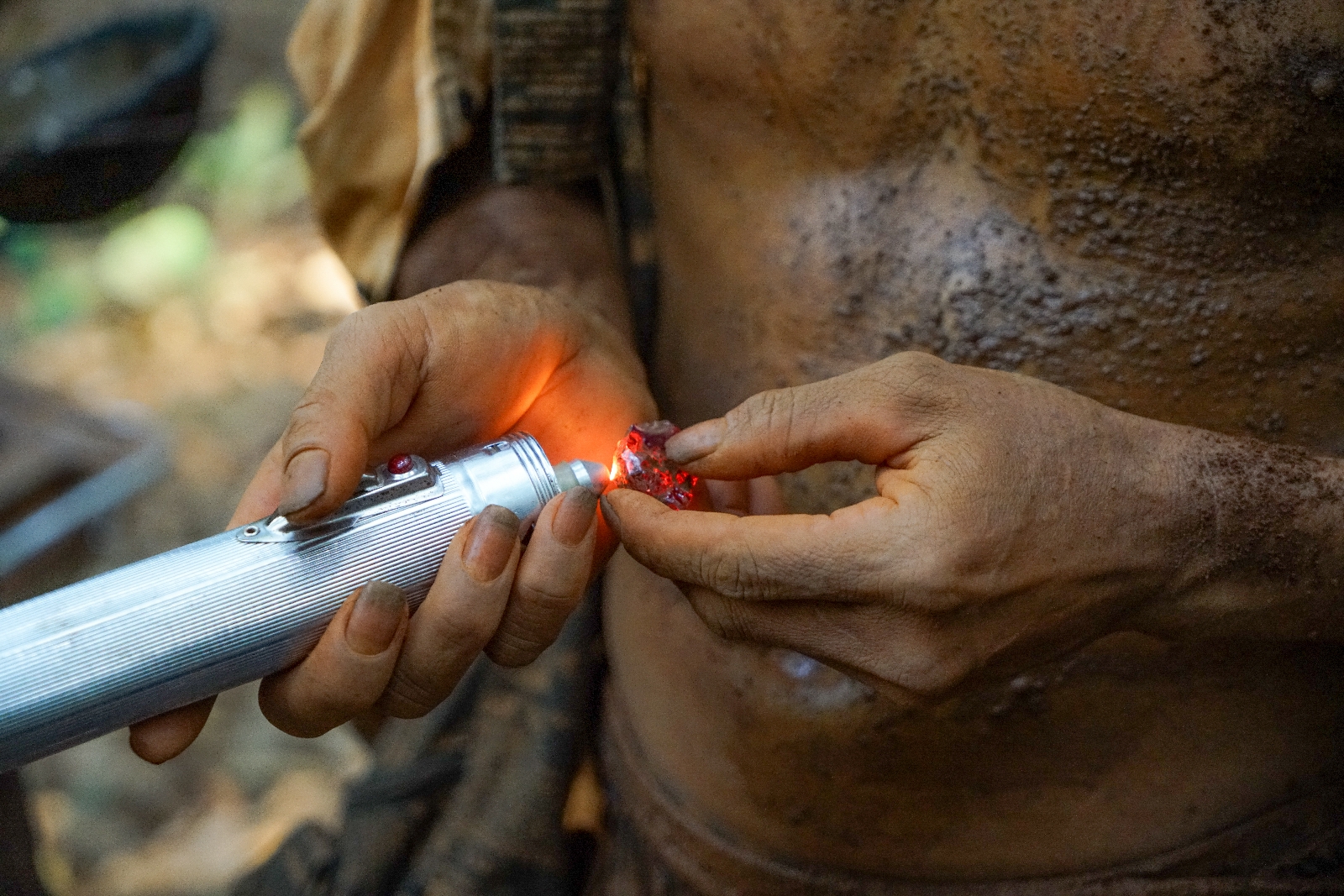 My way to the gem stone miners of Cambodia brings me past honey sellers. The indigenous people from the Tampuan tribe come to the roads to sell their produce. Honey is a treasure and these people are a treasure as well, but no one seems to care about their needs, property or knowledge.

I am travelling in the northeast Ratanakiri province, an area where the so called “ethnic minorities” are actually the majority and where the living conditions are the poorest of the country. The different tribes are referred to as the highlanders, a general term for the indigenous people who live in this mountainous region.

The highlanders forests, once partially sacred and a trusted source for their livelihood, has been sold by the government and is still in the process of being sold out. The highlanders watch how roads are being built through their property, how electricity cables are mounted through their jungle, how foreigners and Khmer alike take away their land and trees; fields with their precious mountain rice and sesame, spirit mountains and rivers (dams are being build) and wild animals under protection of NGOs.

In the 1950s a Khmerization began, with the ambition to bring highlanders under control and push them towards a modern lifestyle, something the highlanders didn’t want. The Khmer Rouge forged an alliance with the upset highlanders – only to later suppress them. Under the Khmer Rouge regime, the tribes were not allowed to speak their own languages or practice their ancient traditions.

Americans threw cluster bombs over Ratanakiri – the suspected Ho Chi Minh trail runs through it – and there are still UXO – unexploded explosives – in the area causing accidents. Khmer Rouge rebel attacks and threats to the local population were going on, unpunished, until 2002. The government in this province is considered especially weak –  another word for corrupt.

This is just as a short introduction to the area, history and people. Banlung, the capital of the province Ratanakiri, has grown rapidly over the last ten years. There is big business to be made with hardwood logging, gem stone mines, gold, cashew nuts, rubber, cassava and pepper.  Once the forest is chopped off and sold, the land is used for heavy monoculture farming by foreign and local investors.

Ratanakiri translates into “the Gem Mountain” – mining for semi-precious stones has been done here for more than 40 years.

What is new, is that the highlanders are digging between the rubber trees, planted and owned by foreign farmers – and not in their own original forest. Their land was signed away in concessions to investors, many from China, Vietnam and Australia for 99 years. 20 thousand hectare patches of original forest, with valuable hardwood trees, are logged and exported. The highlanders have no right to their land, no legal papers, no marker stones, no lobby to prove that it is the land of their ancestors.  A lot of the logging is illegal activity. With the help of SUVs, who drive recklessly at top speed over the newly build roads, stopped by nothing – a sure sign that they carry illegal cut wood, is how heavily they are loaded, the chassis’ are almost hitting the tires.

The miners are mostly highlanders, only a few are Khmer or even Vietnamese, and they come from the surrounding villages. Since they lost their forest – and with that their livelihood – to the people who planted the rubber and cashew trees – they have no other choice but to dig to make a living,.

They start in the morning, the shafts are very narrow, less than a meter. They dig up to 12 or 15 meters deep and then start fanning out horizontally. The shaft has no wooden beams, just small steps for elbows and feet to climb down into the hot and humid mud hole. The first hole they dig is the worst because there is no ventilation and the earth spits out the heat and humidity it holds. Once the shafts are connected, the air floats – but the risk of collapsing tunnels triples. People die every day in Bokheo.

Families work as a team.  Child labor is normal; children need smaller shafts to go down. People dig a seven-meter-deep shaft in one day, one person pulls up the buckets filled with mud. Then the sifting through the sticky earth is done over hours.

There are probably 3 shafts operated by different miners at a length of 8 meters. It is quiet here, people don’t talk. The ones pulling the buckets look exhausted and sometimes they fall asleep. Husband and wife teams often work together, I saw only the man going into the mine with the women checking the results.

A guy with a huge bundle of 5000 Riel notes (4000 Riel=1 Dollar) and another with a plastic bag for the gemstones found are guarding this place. They have subcontracted the space between the rubber trees, 100 x 100 meters, for 10.000 USD from the foreign investor – the mining bosses are Khmer from the province capital of Banlung.

The miners’ work all day every day, they come at dawn and leave at dusk – often they work all day for nothing, because they didn’t find a single stone. They can only sell their finds to these guys – and no one is tempted to challenge them. Everyone knows the bosses are cheating on them, paying very low rates per stone, telling the miners the stones have bad quality or cracks.

But if the miners were to try to independently sell their stones in the public market, they would risk their lives. The monopoly for buying is with the guys holding the subcontract for the 100 by 100 meters between some rubber trees.

A big stone got the miner 10.000 Riel, $2.50 – that is a lucky day for them. The red zirconia – which will turn bright blue when heated – has a market value of at least $150 – but miners from local villages do not visit the market of Banlung. The highlanders have no idea. They don’t speak Khmer; they live their lives inside a radius of 10 kilometres, maximum. Banlung is as far to them – as the moon is to us. Banlung is 30 kilometres away.

The miners work is concentrated, driven, obsessed. To eat or not to eat on a day is decided by the findings of a stone. They are going into the holes and coming back up almost in trance, maybe they are, maybe they are not under drugs. When they are out of the shaft they smoke and lie down. The amount of flip flops outside of a shaft is proof how many people are inside digging.